Women lead with insight and compassion…

Don’t know if this is pc or not.  Calling out what I just keep noticing over and over again, in all kinds of industries, in all types of positions, across the six different decades I’ve had the good fortune to work with/for others.   Women make better leaders than men.  Maybe not managers… but maybe that too.  Definitely better leaders though.

I base my assertion on what appears to be a generally higher level of emotional intelligence, more intuitive decision making, more effective communicating and a cohort that is better able to motivate others through both personal and organizational connection.

Ok, a gross generalization.  Call it one man’s perspective.

These observations go all the way back to my first jobs during the wild and crazy ‘60’s (the first of my six different decades) when I was in High School working nights and weekends to put away enough money for college.  Vivid memories of my absolute worst bosses – supermarket manager who ruled through complete fear and intimidation (since he had no voice box due to throat cancer he had to harshly whistle his displeasure down isle 7); A/C repair boss who ruled by totally ignoring me all the way to the late pay checks that ultimately all bounced; Macy’s department store boss who somehow managed to straddle those two opposite styles leaving me and my peers completely disconnected from our jobs and the company.  The list goes on, but let those three stand as representative of my experience with male leadership.

Ok, not what you’d call sufficient evidence for an empirically scientific hypothesis.

The 70’s and 80’s were much better, in large part because I finally was able to work for/with some amazing women.  Like the South African Montessori teacher who took me under her wing and taught me the best parts of Maria Montessori’s method and how to distinguish it from the Americanized BS that came later.  And we founded and led a parent cooperative elementary school that in addition to a solid, grounded education helped a multitude of children and families navigate the emotional roller coaster of separation, divorce, blended families and all that life in the 80’s brought with it.  And the school is still going strong some thirty-five years later.

Or how about the woman who took a chance on a thirty-something aspiring entrepreneur to head up an energy services business that she and her husband wrote the business plan for as the for-profit sister to their not-for-profit socially responsible policy producing consulting firm?  Whereas I struggled to make the for-profit business succeed (the two years of mostly sleepless nights during which I feel I earned an MBA in how NOT to run a business), and failed, she managed to build her socially responsible business into a 100 million dollar organization while serving on many low income advocacy boards along with the board of the Vermont Businesses for Social Responsibility (the nation’s largest organization of its type).

Yes, I have had the good fortune to work with a few men who did lead with insight and humility, albeit sometimes lacking in compassion and grace.   They are out there, the exception to the rule, in my experience.

The good news is that women are making headway in the ranks of management and leadership.  As Lisa Belkin points out in her NY Times article, “Calling Mr. Mom”, women “are 50 percent of the workplace (and 51.4 percent of managerial and professional jobs). We receive three college degrees for every two earned by men (along with 60 percent of all master’s degrees, about half of all law and medical degrees and 43 percent of M.B.A.’s). Working wives are coming close to bringing in nearly half the household income. 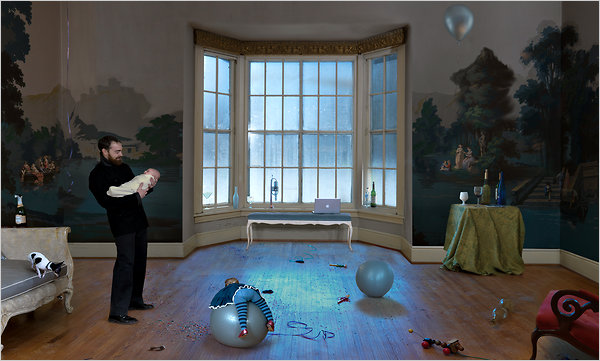 As Ms. Belkin also points out women “currently make up only 3 percent of Fortune 500 C.E.O.’s”, so at the top leadership positions there are not a lot of role models.  Hopefully that is changing.

Her article is really more about work/life balance, in particular how that looks on the home front in terms of shared family responsibilities.  Definitely worth a read.   Maybe us men folk will learn about compassion and grace in the workplace by spending more time at home navigating diapers and tears?  Can’t hurt, can it?